Lemon tarts are one of the things I miss from living in SF, where our apartment was walking distance to Tartine. A special occasion treat, ideally shared with a friend, their version is pretty different from most other lemon tarts I've tried. I'd always wanted to learn to make it, and it turned out to be not as hard to make it as it had seemed, and a good project to do with Adam on Valentines in the pandemic. 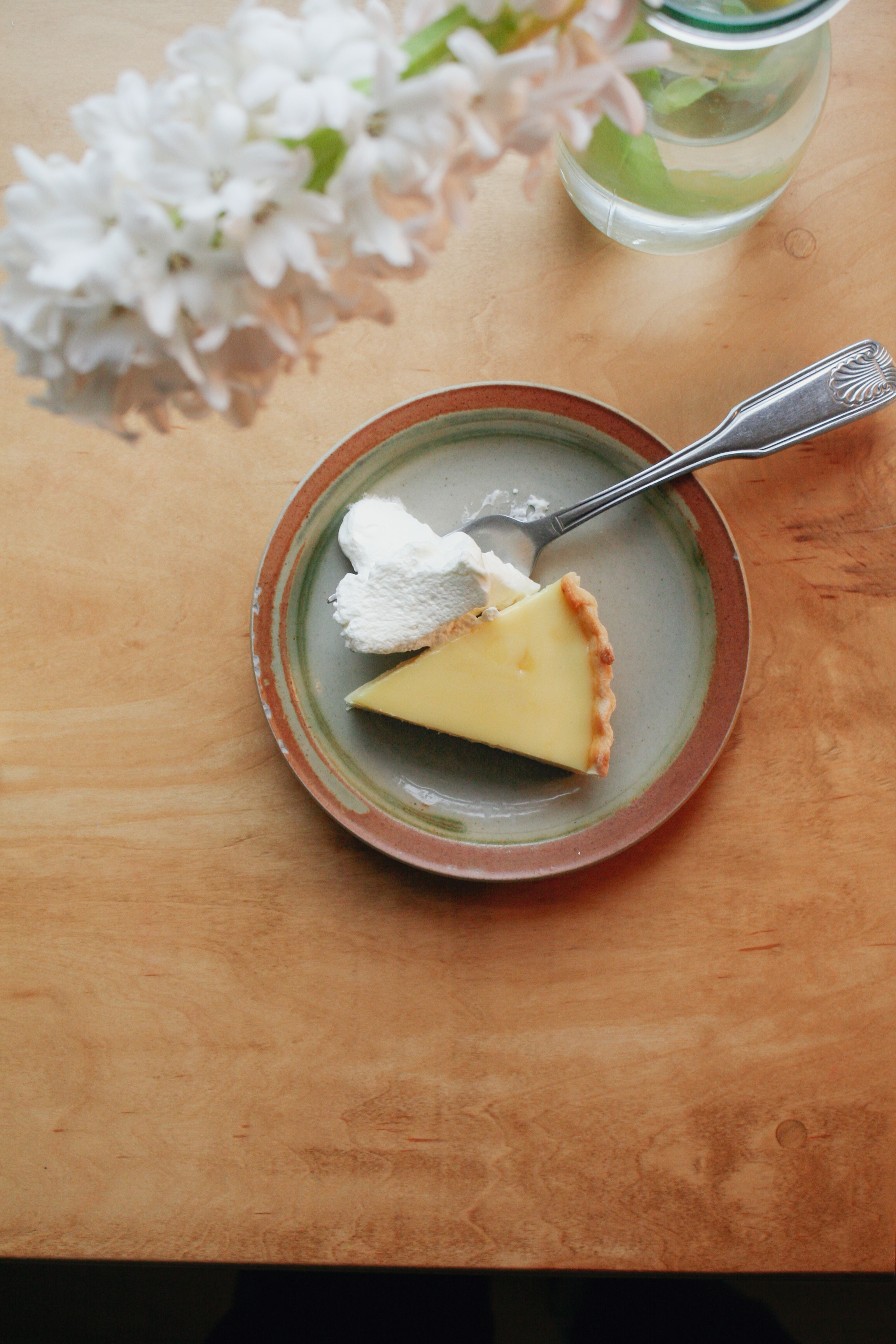 Basically, you make three things separately: tart shells, lemon cream, and whipped cream — and combine them. The tart shells need to cool before being filled, and then the filled tarts need to cool in the fridge 2+ hours before serving, so they seem like a good thing to make a day ahead or spread the process over two days, like we did.

This is an involved pastry recipe! It has a lot of kitchen tools that I didn't have earlier in my cooking, since most things accumulated slowly via thrifting, and apartment kitchens are small. Like the stand mixer! I have one now, and use it for pasta, pastry dough, and cookie dough — but got along fine for years and years without one. You can mix pastry dough patiently by hand, although it doesn't come out quite the same, its still great. And for rolling pins I used wine bottles for years.

I don't bake without a scale, so I didn't include any of the non-weight measurements, but if you google "tartine lemon tart" you can find lots of versions of this recipe, and it's also in the cookbooks Tartine: A Classic Revisited (which is the one I baked from) and the first Tartine pastry cookbook. So head to one of those if you don't have a kitchen scale, and keep an eye out for a digital one that measures in grams — they really help make cooking faster and easier!

It would also be useful to have a candy thermometer here, or something with a range of 140 - 180 F that could stick in liquid. It's on the to-thrift someday list.

We made the dough the day before baking it, then shaped and baked the shells the morning that we wanted to eat the tarts.

This makes something like twice as much dough as you need for the tarts – kindof depends on what shape pastry trays you use. Extra tart dough can become sugar cookies later, or frozen! Or shaped into ovals, separated by wax paper or parchment paper, and frozen. You could also halve the recipe below.

Bring 255 g butter (a bit more than 2 sticks/half a big block) up to room temperature while you get out the rest of the ingredients, and a stand mixer:

In the mixer, combine butter, sugar, and salt until creamed. Add the eggs one at a time, then scrape the sides of the bowl.

Add the flour all at once.

Mix until the dough has formed, cover the bowl and put it in the fridge for 2 hours, or overnight. (You can also freeze it for later at this point.) 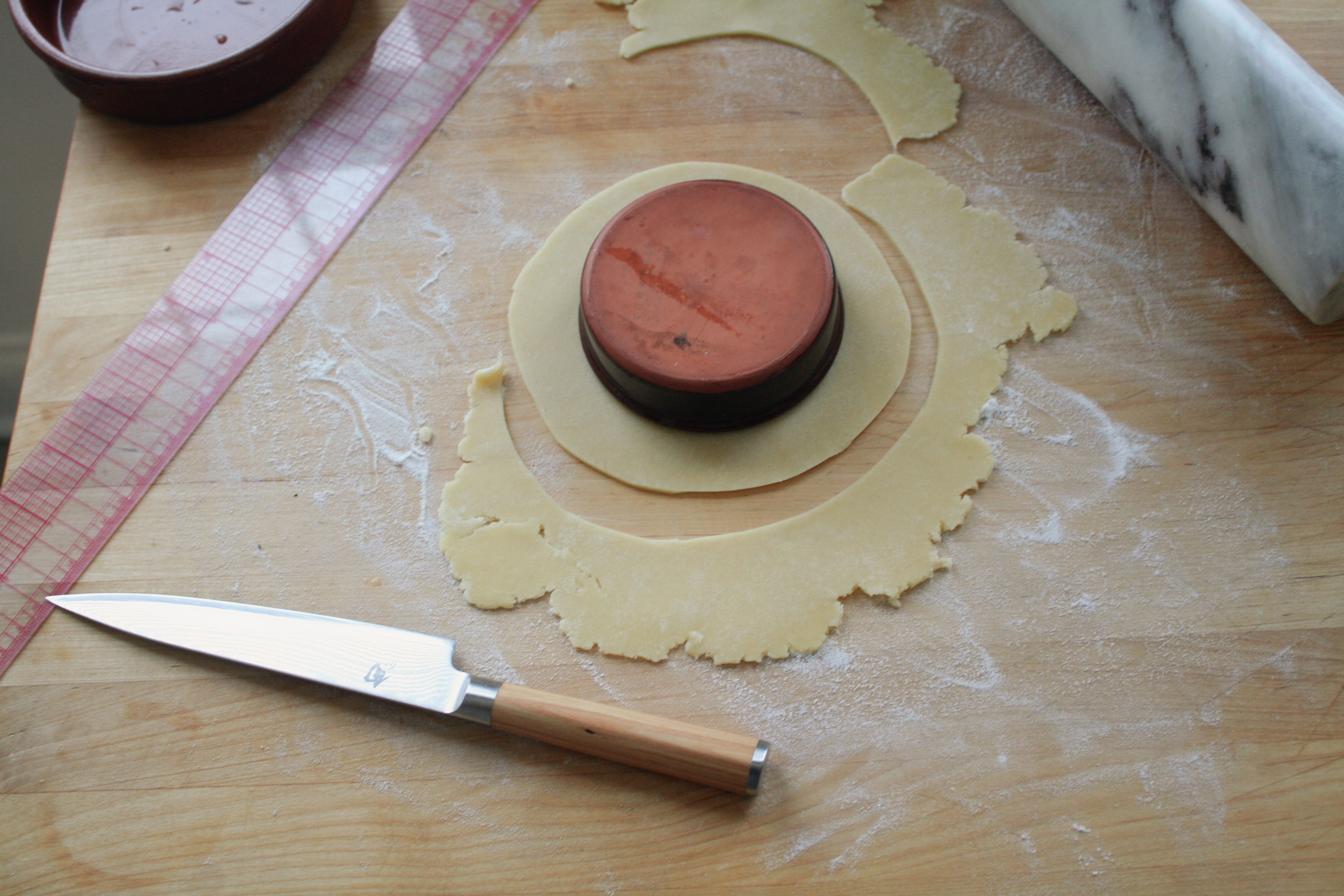 Roll out the dough to 1/8" / 3mm thickness, cutting circles that are 2" larger than the pan diameter. I put down rice flour to help keep from sticking on the counter.

Press the circles into pans, and use a sharp knife to trim off the dough at the top of the pans to make it even. 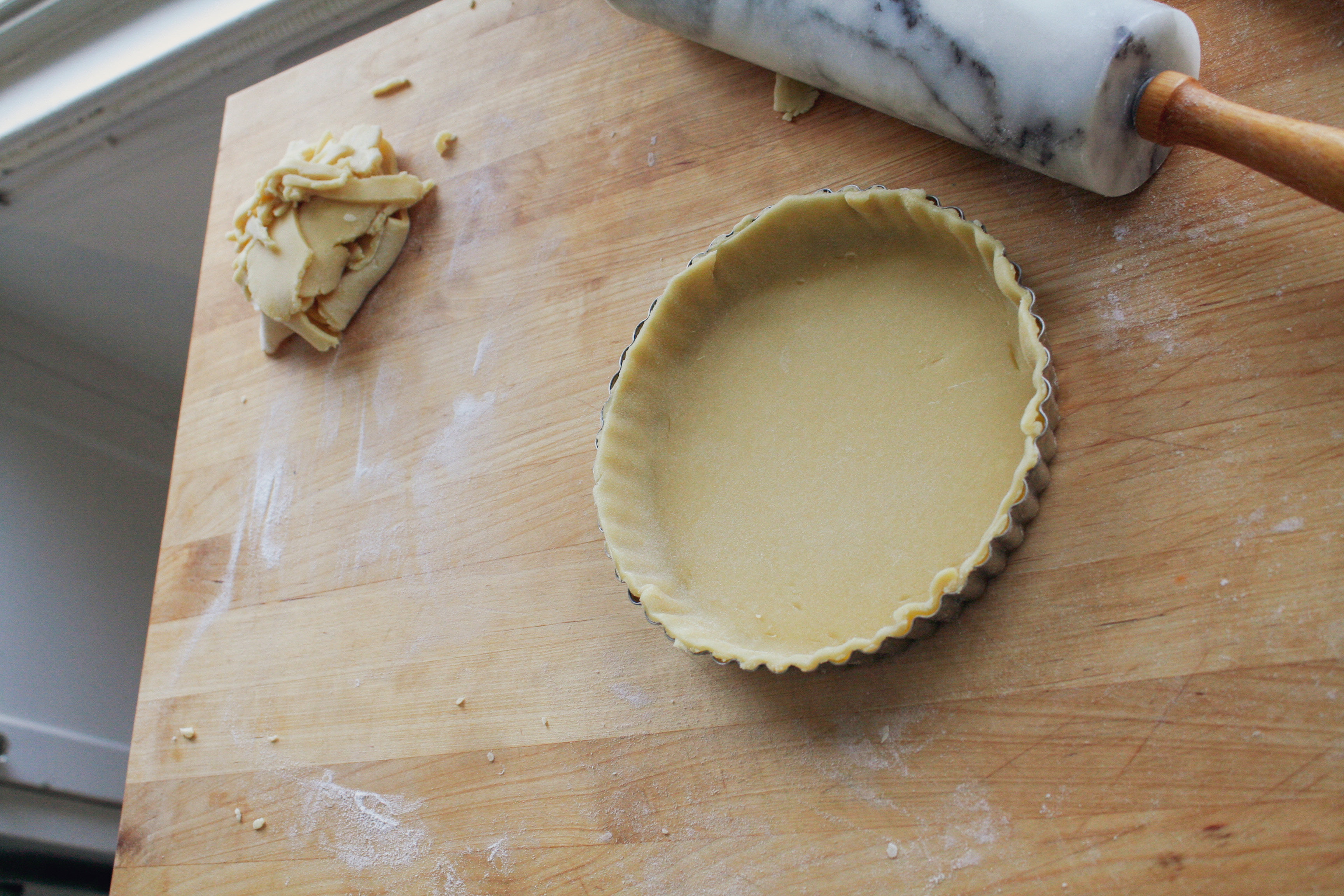 Set the dough filled pans back in the fridge to cool for a few minutes (like 15 min+) while you get ready to bake.

The scraps and trimmings can be re-rolled, or go into the extras pile to be frozen or made into cookies later.

While the shells are cooling in the fridge, preheat the oven to 325 F. If you want to do an egg wash mid-way through, whisk an egg together with a pinch of salt in a bowl and have it ready too.

With a knife or fork, poke small holes in the bottom of the dough about 2" apart.

Bake the shells for 5-7 minutes for smaller shells, or 7-10 min for larger ones.

Apply the egg wash with a brush. 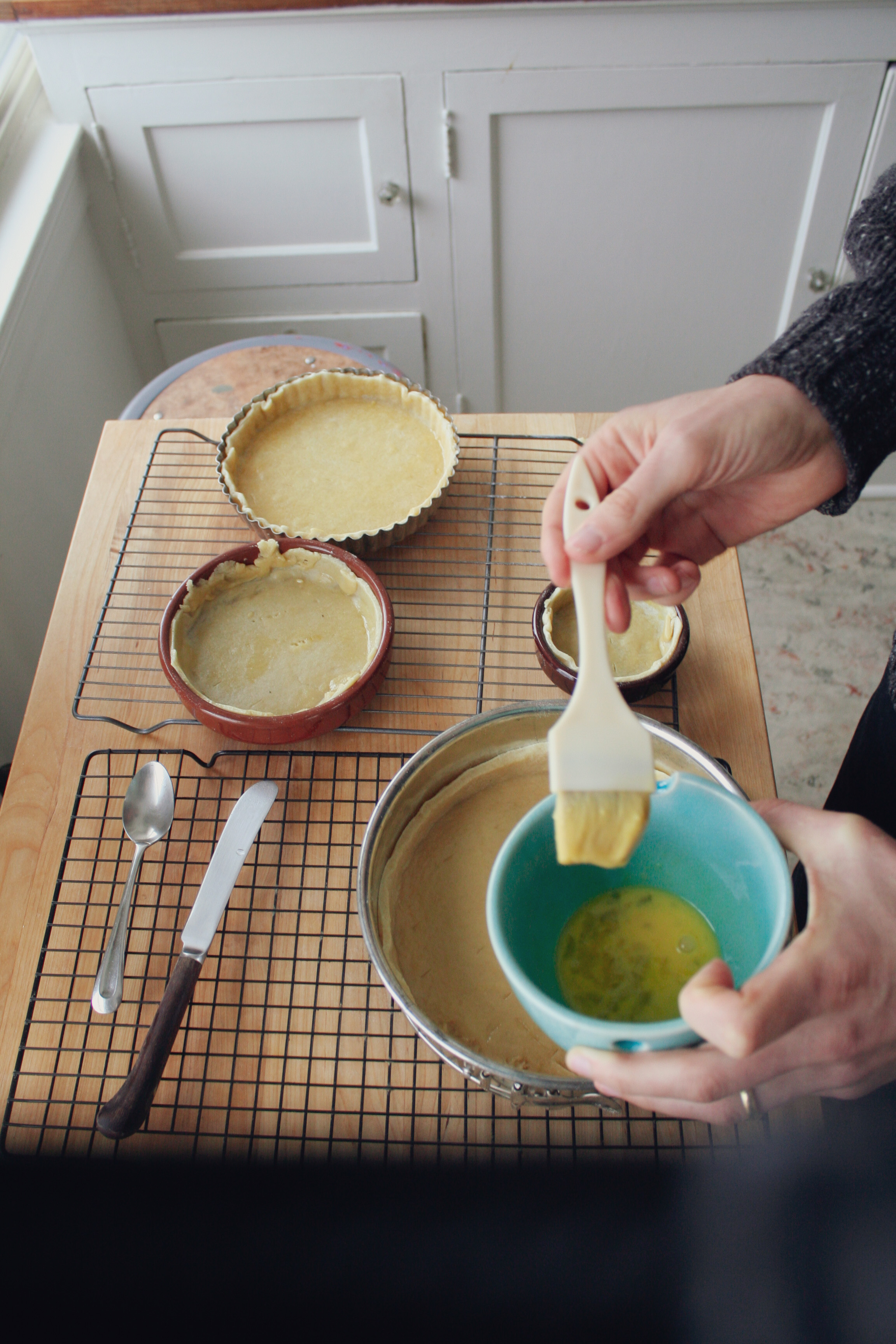 Bake to a golden brown, about 5 more minutes, maybe longer. In the future I'll cook mine just a tad longer than this picture shows. 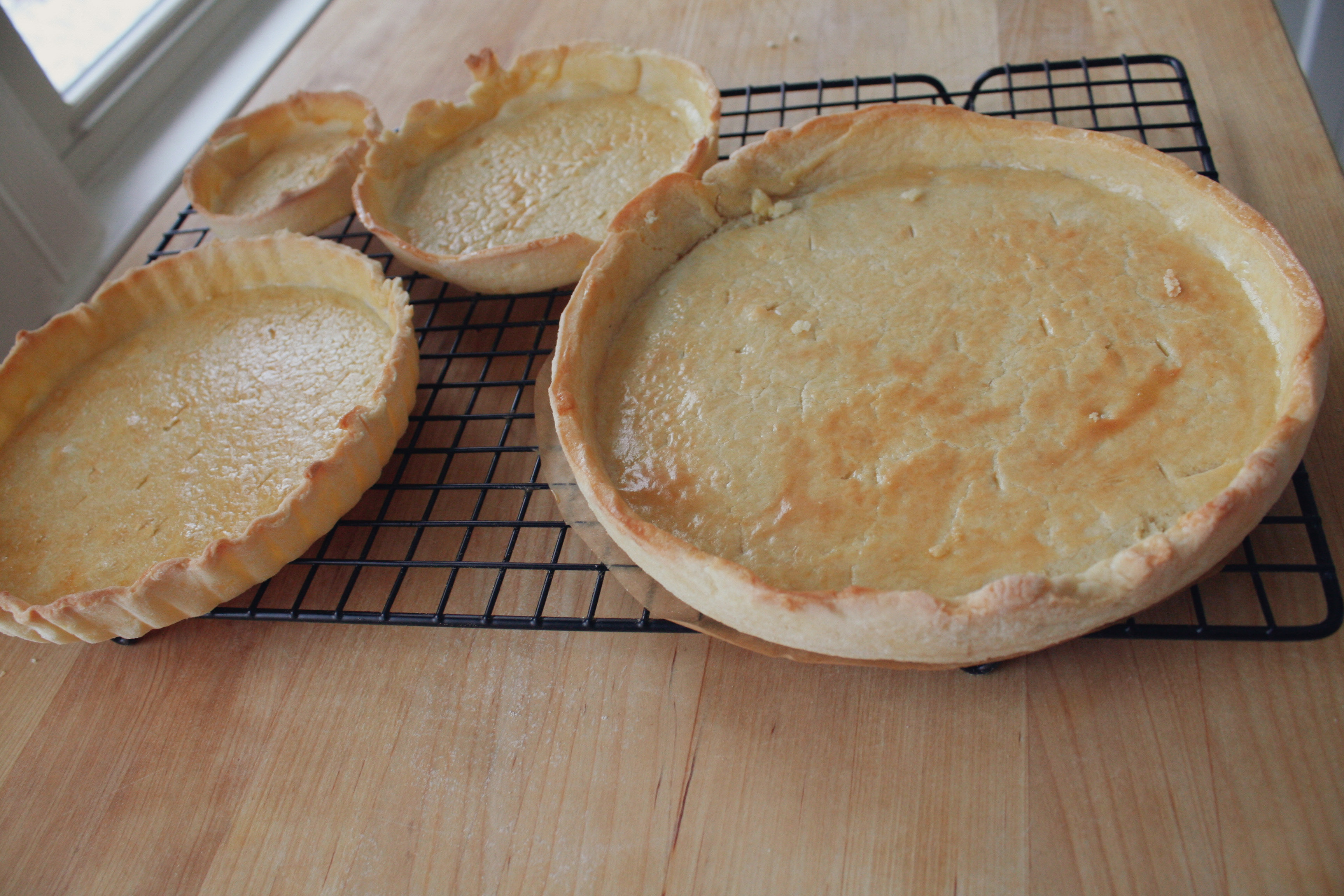 Allow to cool in their containers in a rack, then tip out to just be the little shells, standing on their own! After they're cooled, you can fill them. Or you can freeze them for a while at this point, or put them aside at room temperature or in the fridge until you're ready to fill.

We froze the giant shell and filled the three smaller ones.

First, weigh out 225 g of butter, which is a bit more than 2 sticks, and let it get warm a bit, you'll be cutting it into ~1T pieces later (or cut it now if you want! it's just easier to cut once it's warmed up a bit). 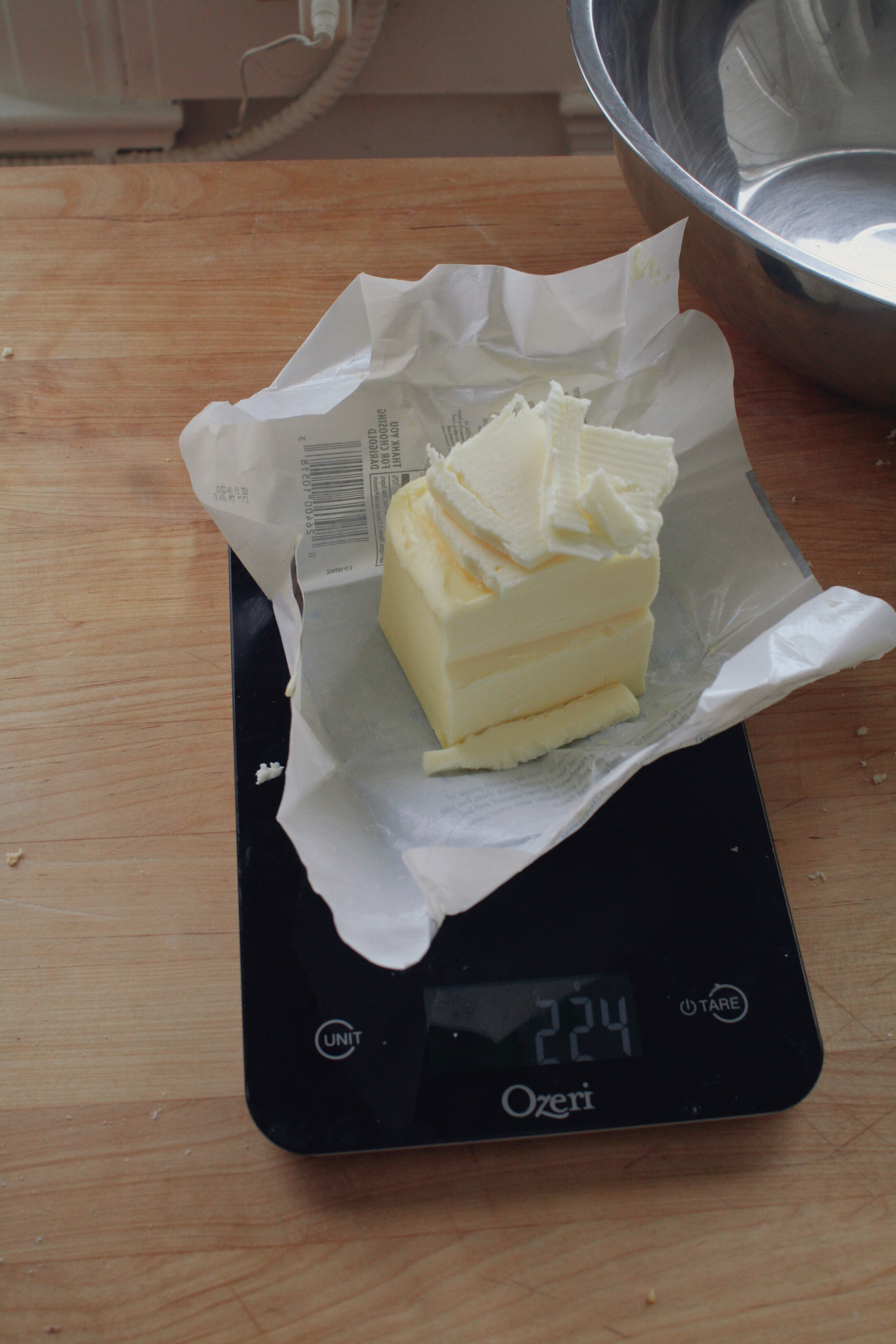 Put a stainless steel bowl over a big pot with about 2 inches of water in the bottom, and check that the water is not touching the bowl. This is so it creates a lot of steam under the bowl – figure out a double boiler setup with what you have, basically. (Photo below shows what we used.) Bring the water to boil, and bring your bowl over to your scale.

Gather your ingredients, and add them into the bowl:

Whisk together as you combine sugar, never going "more than a few moments" without whisking or else the "sugar will cook the eggs" (!!? ahh ? we didn't seem to run into this issue). Once you've combined them on the scale, whisked together to a consistent texture, then move over the double boiler.

Now that you're double boilering (and still whisking away quite regularly or even continuously), keep going. Double boil + whisk for 10-12 minutes. 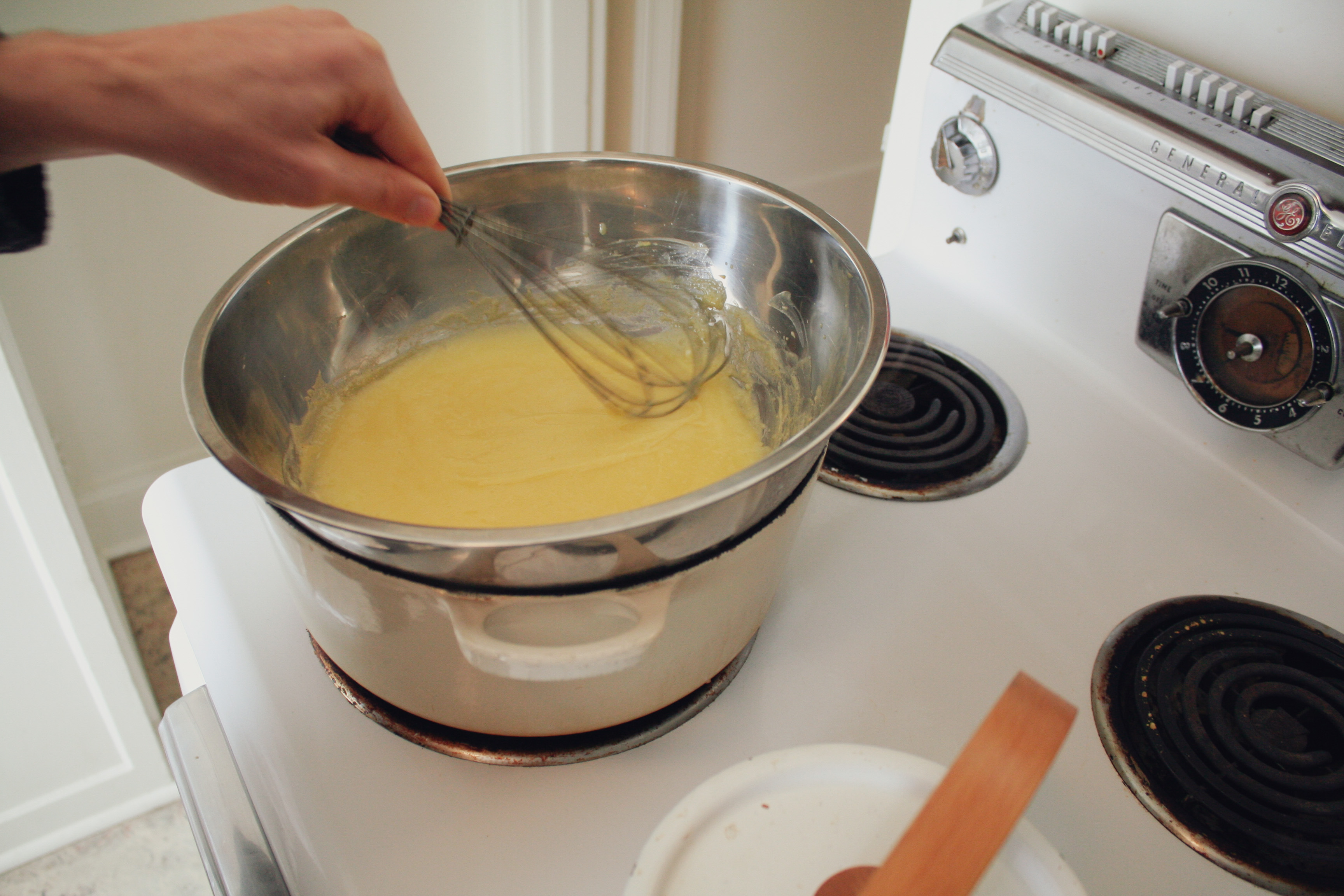 You want to bring the temperature up to 180 F if you have a candy thermometer (we didn't). The steam below is cooking the mixture slowly and gently, without applying direct heat. During this process Adam and I hung out and listened to music and chatted and danced around the kitchen a bit. The lemon-egg-sugar mixture changes color/texture/opacity quite a few times during this process, it's cool to watch.

After it's been 10 min or you reach 180 F, remove the bowl from the double boiler and set it on a rack or hot pad to cool (to 140 F). You can stop whisking so consistently now, but whisk occasionally to help "release the heat".

Chop the butter roughly into approx 1 T chunks as the mixture is cooling. Also stage the tart shells for filling.

A chunk of butter at a time, immersion blender the butter into the mixture complete your lemon cream. 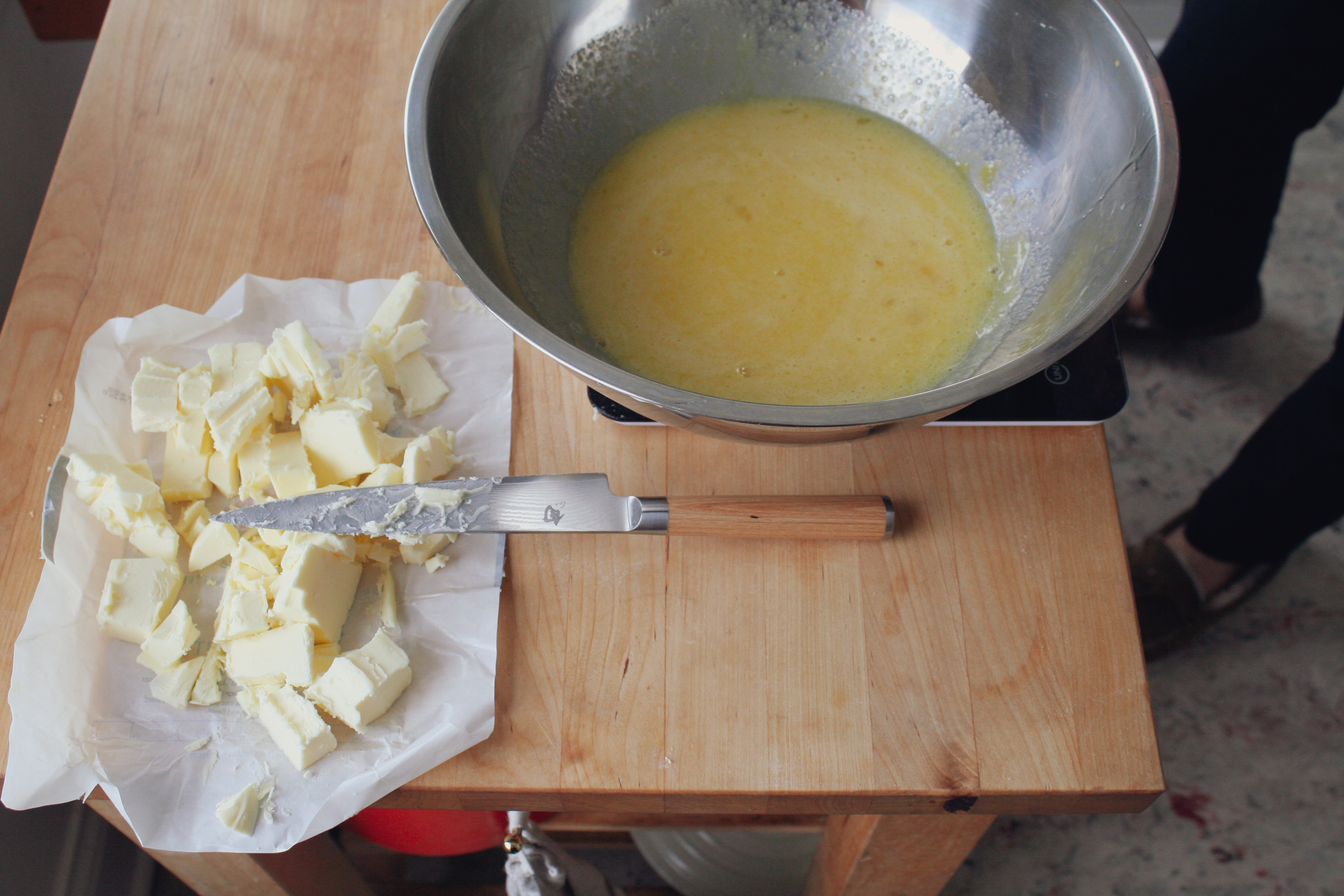 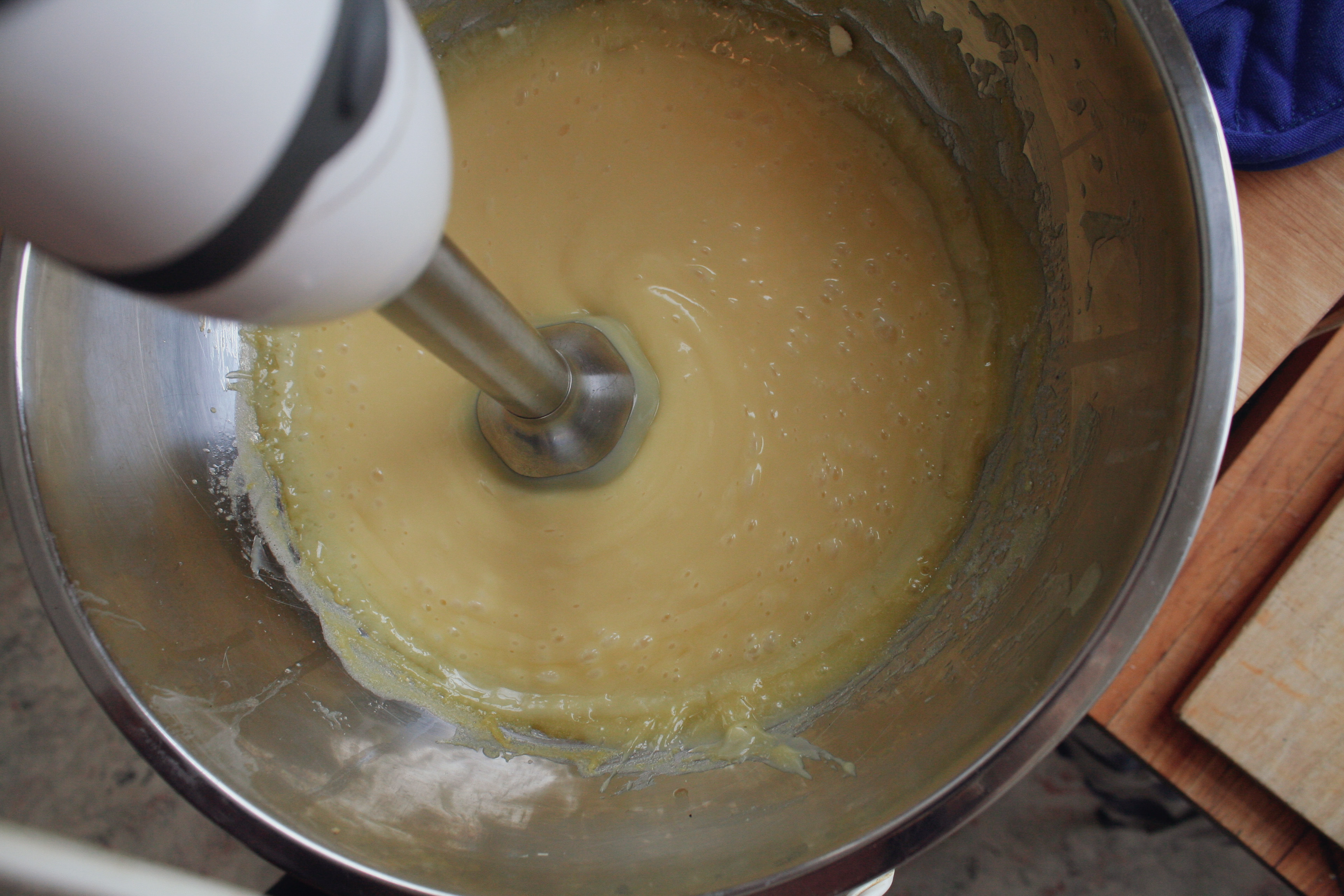 Fill the tarts as soon as all the butter is blended in, and give the shells/pan a gentle shake to smooth the top. Fill as many shells as you can, save any extra shells in the freezer. Or save any extra lemon cream to spread on toast or just eat on top of anything or plain as a pudding. 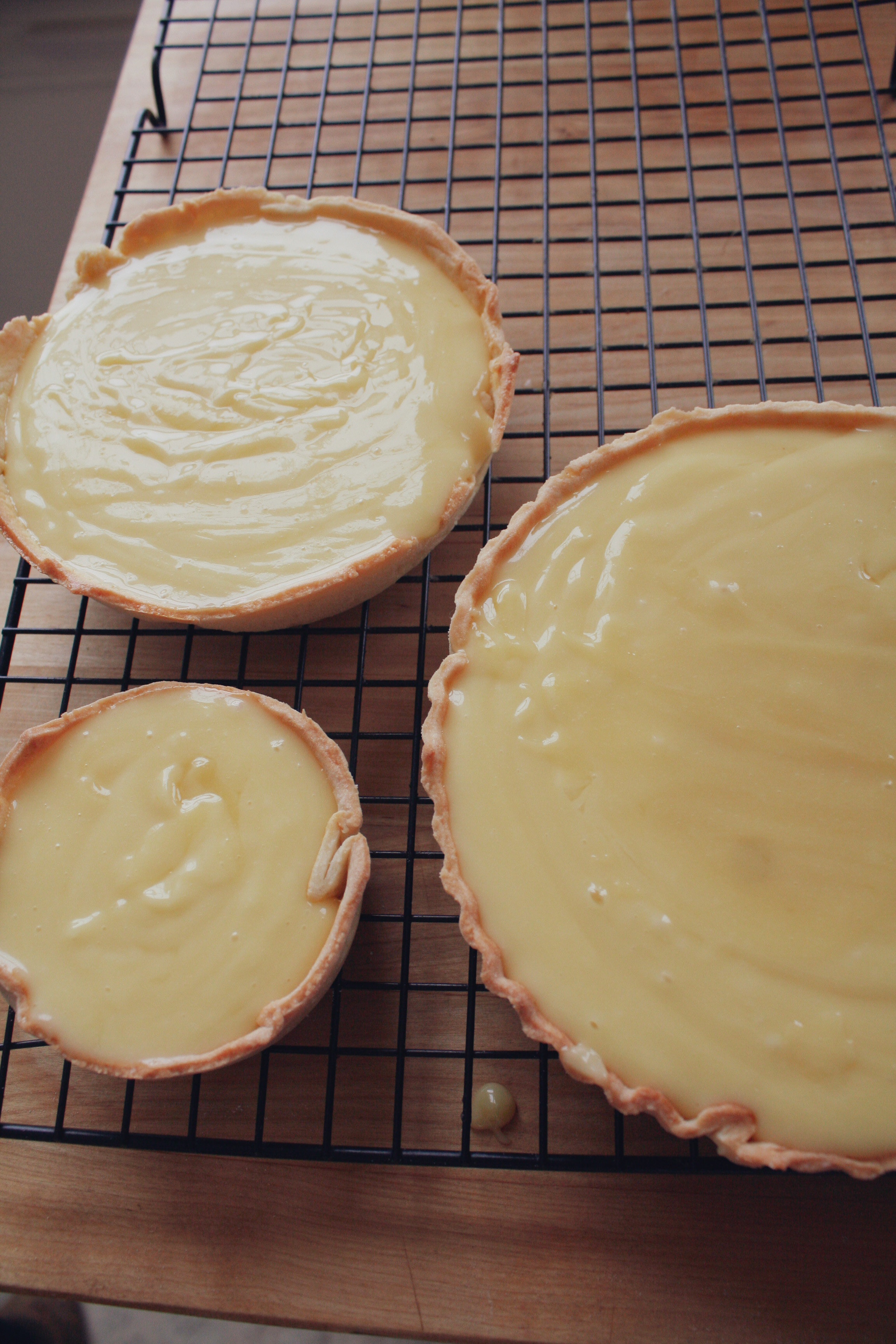 With the whisk attachment of a stand mixer, whip 240 ml heavy cream that's very cold until it's thickened.

Add in 2 t sugar , and whip more, "until it holds soft peaks" – whip less than you think you need to!

Put the whipped cream on top, and enjoy the tart!

If you want to be fancy, the oval shell shaped blobs that Tartine uses are called "quenelle" and you form them by heating an oval shaped spoon in hot water, then doing a swoopy motion in the cream. I have yet to master this, but there are videos, like this one from a pastry chef, and blog posts. Excited to learn this exists and try to practice it – it wasn't mentioned in the book but I quickly realized that it was a special technqiue when I tried to get a pretty dollop and it didn't just magically happen. Quenelle!!

This came out just like my memory of the tartine lemon tart! Success! It also made a lot, we shared with friends. I'm looking forward to making this again.