I make a loaf or two of sourdough each week, and it’s one of my favorite home routines. It’s incredibly delicious, to start, and I always have a base for a quick breakfast or snack - just add some butter or jam, a bit of cheese, an egg. Or some more hearty toppings for a tartine (open face sandwich). 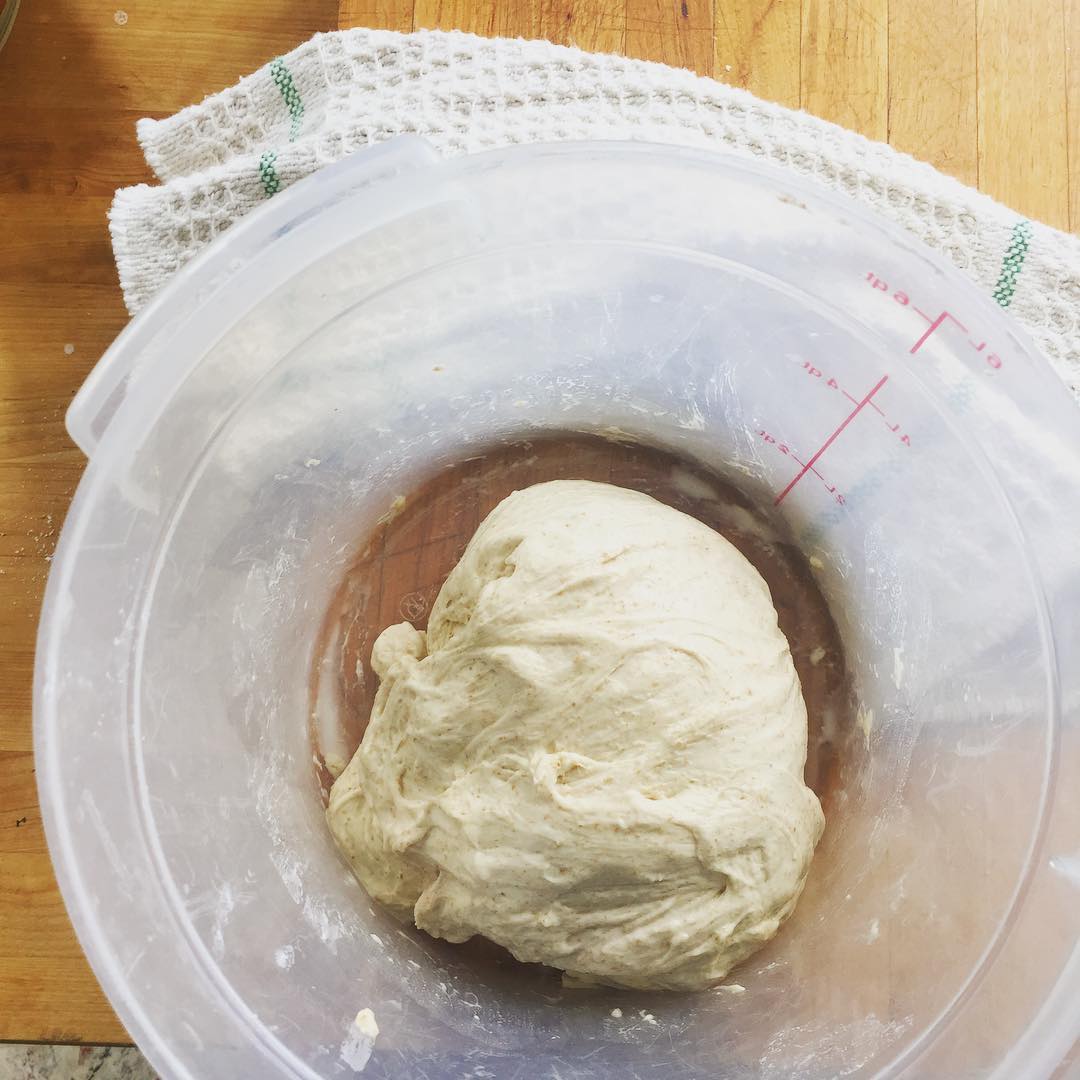 I also like that it saves a lot of money - it only costs 69 cents a loaf worth of ingredients to make! (See: The Delicious Math of Sourdough). I the process itself - doing something calming with my hands and senses - and it’s a great present or thing to bring along to dinner or brunch or picnic with friends. 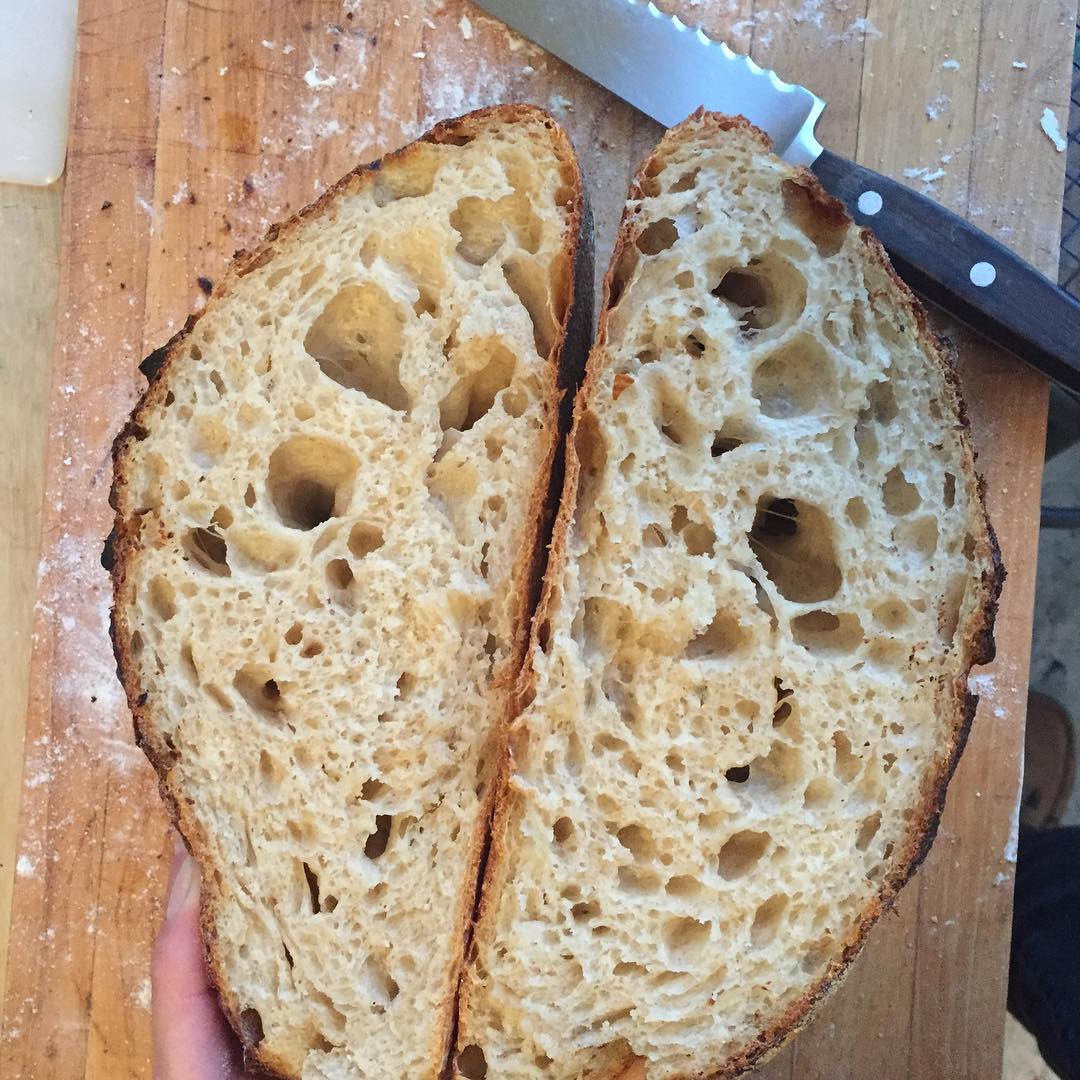 I’ve made several hundred loaves of sourdough so far, so I thought I’d take some time to write about it.

The first era was in college in Nashville, a starter that I got from a friend, who instructed me to feed it from a box of potato flakes regularly, and gave me the instructions to make a very sloppy, unstructured dough. (In retrospect quite a strange sourdough.) I’d mix it up, pour it into three metal loaf pans, and bake it. It made something that looked like a banana bread or nut bread, in terms of being block shaped, and with that type of crumb. My greatest triumph was making an agreement to bring one of the three loaves I made each week to my printmaking teacher, in return for a print (too expensive for me then) at the end of the year. Still love that print. The bread was squarely in the OK category in retrospect, but it saved me money on groceries and my friends liked it. 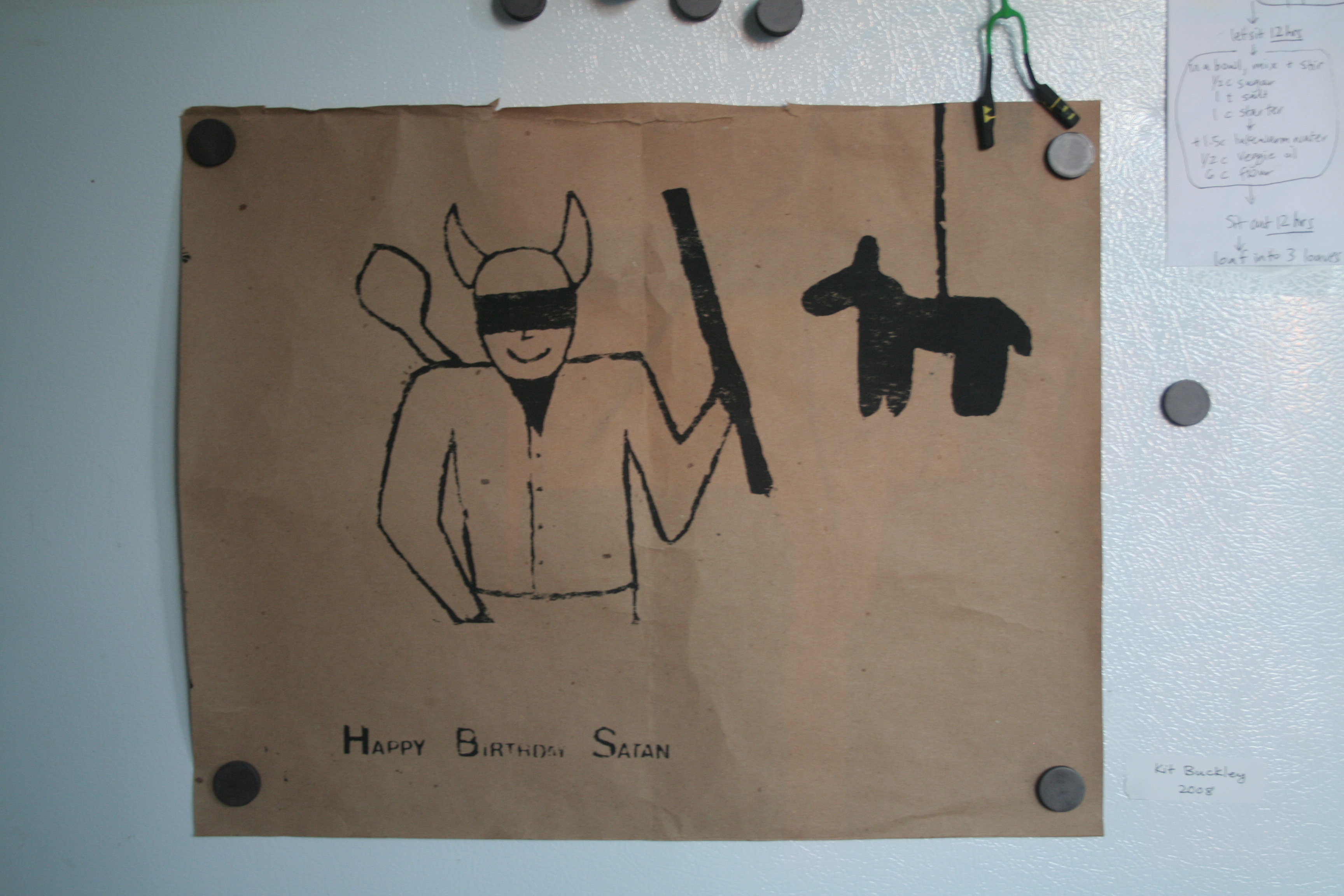 I said goodbye to that starter when I moved to Seattle, but luckily there was a legendary day old bread dumpster that we quickly learned about. We ate dumpster bread from for years, so there was no need to make bread anymore. (But we did make hundreds of pizza doughs.) That glorious dumpster bread probably saved us from spending $1000 or maybe double that on food annually, which really made the budget work in grad school. (Grad student researcher salary was $18k/year post tax for part time work, and I was trying to save 50%.) So we ate a lot of bread! Also dumpster bagels, which really weren’t that great. Then the bread dumpster moved too far away to visit, but we also moved, to San Francisco, where I ate a lot of sourdough too.

Especially from Tartine bakery, and sometimes at special dinners at Bar Tartine or Outerlands, and other spots around the city. I am not claiming that Tartine is the best bread in SF, either… I don’t actually think it is - it was just the closest-best to where I lived, and still had a haze of the magic of that first time I was taken there in 2003 - so beyond my idea of food at the time, it was life changing just to be there. (Also the trip I decided I had to live in SF at some point in my life.)

As an “intuitive baker,” the tinkering camp had always been a mystery to me, even with one of those devoted tinkerers tinkering in my own kitchen. “Women are more matter-of-fact [with the bread recipe],” Robertson told me. “They just make it.”

The more serious I got about baking bread, the more I focused on the tech bros invading the sourdough trend. I asked Benenson if there is any reason to feel cynical about this new interest of theirs. Aren’t the tech bros creating a parody of themselves in tinkering with bread — bread, for crying out loud! — in such an obsessive way? “Shouldn’t we encourage more technologists to pick up hobbies like this?” he wrote to me in an email after we initially talked. “It connects you to your environment, friends, and being present with food. Maybe we shouldn’t be thinking about the trend as some kind of threat to the purity of baking, but more about an opportunity to help technologists rehabilitate their humanity in the kitchen.”

(I’m definitely in the “matter of fact” camp in terms of just making it each week, but now that I’m doing all this writing about how much it costs and the timing, maybe I’m …lol. Seriously though, the article is really worth reading.)

Anyways, through all the SF years, I didn’t make any sourdough myself. (Plenty of pizzas though. And I found a pastry dumpster.) A few years later, back in Seattle, I realized that one of the only things I missed about life in SF was the bread.

BTW, I am not dissing Seattle bread! There is some REALLY good sourdough bread here - just a few in my own biking distance: Sea Wolf, Tall Grass, London Plane really stand out. And Le Fournil by the University bridge, Le Panier in Pike Place, Standard Bakery (farmers markets), Columbia City Bakery… There are more, they are delicious. (And those are just the sourdough/French oriented ones.)

But they are not in walking distance for me, except the farmer’s market, which I don’t go to on a regular schedule. Probably I was also just missing making bread myself. I read Reading My Tea Leaves post about sourdough and thought, yeah, I should do that. Just re-create Tartine at home. Good enough. It has good pictures and instructions in the book, and I know it’s delicious.

And I realized that we were spending $250-350 a year on bread ($5-8/loaf times ~35 loaves a year?), so there was definitely some budget for me to buy a few tools if I wanted to make it myself. (The ingredients themselves are inexpensive - see The Delicious Math of Sourdough for how to make a $0.69 loaf.)

Finally, I ran into my friend Ruth on the train one morning, and she said she’d give me some of her starter and a lesson on how she makes it, basically just the Tartine style with some Portland Ken's Bakery thrown in. And that the restaurant supply store Cash & Carry (since renamed to the boring “Smart Food Service” - who can remember that?!) was the place to go to get 25 pound sacks of bread flour, and big plastic tubs to store the flour in, and mix dough in.

Her run-down on how it all works and works with her schedule was amazing. Somehow that's what I really needed in order to get started. (I'll write about that in Getting Started Making Sourdough Each Week.)

I did a tiny bit more research, bought the Tartine book and read through the 50-ish pages of instructions and photos, thrifted a circular basket for proofing and a strange dutch-oven-like thing made of stoneware to bake in. And then I got started, and the first loaf came out great, and I’ve done it every week since January 2017, except when I’m traveling.

And it’s delicious. You might want to start making bread each week too!

sourdough
Back to posts