Solo Protesting (in the pandemic)

I haven't been able to go protest and march right now, because of the pandemic + some health things. Solo protesting has been a way of getting out there and protesting without being in a crowd. 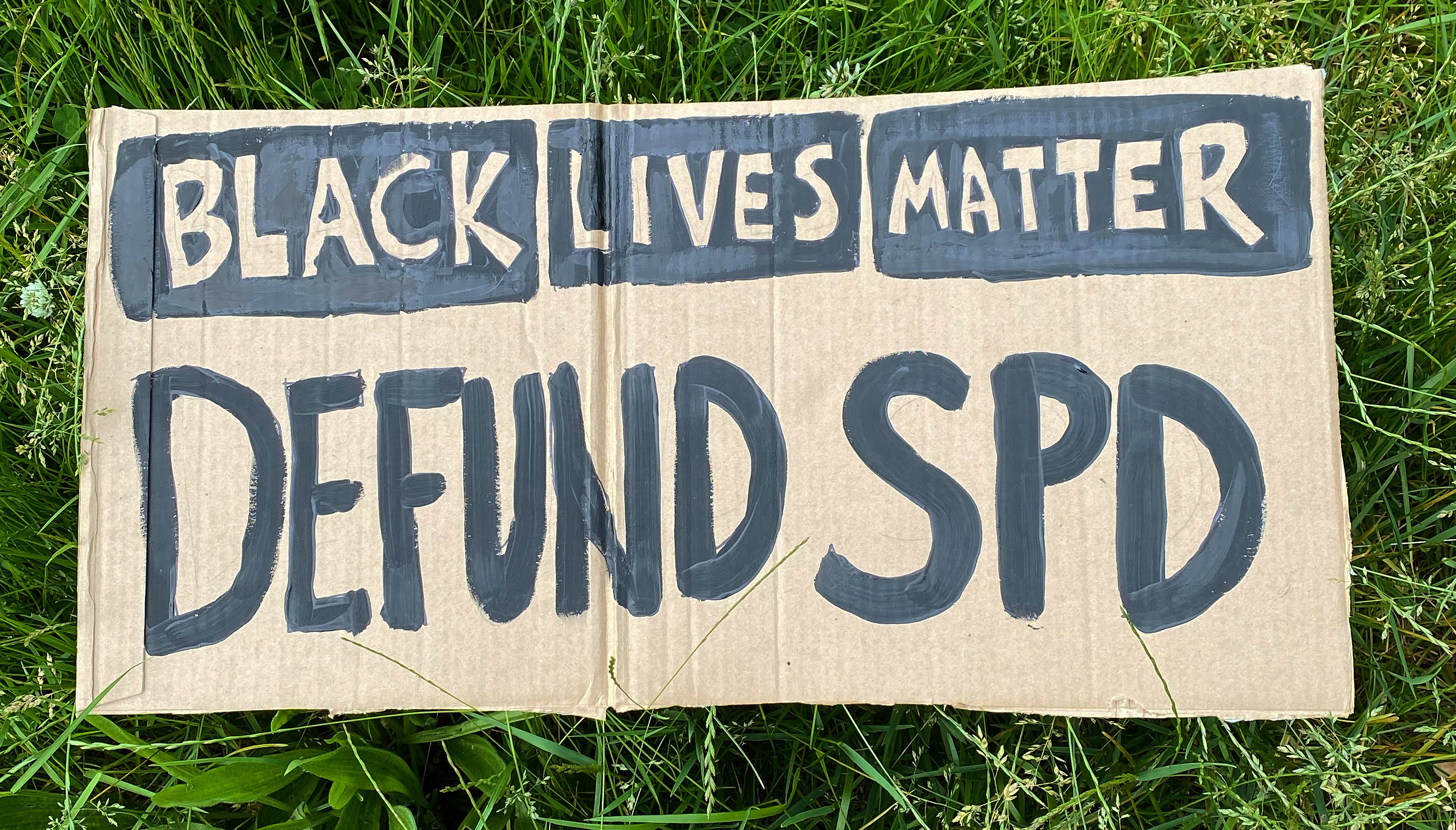 I painted a sign on some cardboard, and took it to a median where a lot of cars are coming off of an interstate on-ramp. I put on my face mask and put an album on in my earphones, and stood there for the length of the album (~45 min). I waved back at everyone who honked or waved. Another day, day some neighbors came out and joined for a while.

As a white woman I the chances were good that nothing much would happen to put me at personal risk. From past experiences, I guessed that maybe someone would throw spare change or water bottle or a soda at me from their car, or various creepy men stuff. Not much so far. Being able to stand out there and only be minorly hassled is huge example of why it's important that I show up as a white person (and in marches, follow the lead of organizers). I personally risk so so much less.

I'll be out there solo-protesting. It's not the same as marching with the group, but it's something. I think it would also work well as a family/household, or you and a friend standing across the street from one another.

I also signed the call to Defund the SPD as well as to call for Mayor Durkan's resignation. Please join me.

Police reform efforts—from Minneapolis to Seattle—have failed. To stop police violence, the police must be reduced in size, in budget, and in scope. The police have never served as an adequate response to social problems. They are rooted in violence against Black people. In order to protect Black lives, this moment calls for investing and expanding our safety and well-being beyond policing. To that end, we demand:

1- Seattle's Mayor and City Council must immediately defund Seattle Police Department (SPD). The city faces a $300 million budget shortfall due to COVID-19. Seattle City Council should propose and vote for a 50% cut from the $363 million already budgeted for SPD.

3- The Seattle City Attorney must not prosecute protesters, including those arrested violating curfew, and those living in encampments. Protesters took to the streets to call for the end of the murders of Black people by police, and SPD unnecessarily escalated tensions and violence.

Our schools, workplaces, and government offices frequently collaborate with police. The police are an occupying force in Black communities. Their brutality towards Black people is condoned and accepted as business as usual. We urge all local governmental and non-governmental entities to cut ties with the SPD. When they put on their badges, police officers cease to be members of the working class. In fact their primary role is to surveil, control, and silence all forms of dissent to support the continuity of a racist, harmful, murderous status quo.

Here's some illustrations of a future where we've abolished the police – Ezra C Daniels has been drawing uniforms of the public service departments that will replace the police:

Also, Bill MCKibben on Gene Sharp's catalog of "methods of nonviolent action" that people use to stand up to authority. I'm glad to be reminded of this list of 198 methods, you might like to read it too.

anti-racism
Back to posts