If you’re a regular blog reader, go ahead and skip this post — it’s totally boring unless you’re trying to network a riso printer! :)

Figuring out how to set up my RISO duplicator (I have an MF9450 model) to print from my Mac was a little confusing in parts, so here are my notes — for my future self, and for any of you googling for help.

Downloading and Installing the RISO drivers

You download the Drivers from riso.com/download. For mine, I picked Series Category of Duplicator, and then MF Series for the Driver Type, and then it showed me my computer’s operating system (macOS 10.15) and had a button to click to download the files. (Or you could select the OS by hand if you wanted a different one.)

The files were actually just all of the available Duplicator model drivers for OS Catalina 10.15 — not just the MF series, but all the rest of the models. It also has a PDF of the Printer Driver Manual available, that is useful. (PrinterDriver_UsersGuide_MAC_ENG.pdf)

Installing the Printer on the computer, I found these two tutorials most helpful:

Those help you figure out stuff that the manual doesn’t show — like that for Protocol you need to pick “Line Printer Daemon — LPD” and a couple other selections, like how you pick the printer driver you just installed to use, that make it work.

Some things that might not be obvious from the Printer Driver Manual (and these are for my model — yours might be different, esp. if it doesn’t have built in networking):

One last note on the driver setup: I’ll be very careful before updating to another major version of Mac OS past Catalina until making sure riso drivers are updated and available. RISO took almost a year to make the drivers for Catalina available - the OS came out in early October 2019, and the updated drivers took until the beginning of August 2020 to arrive. In the meantime, there were no drivers that would work for printing from that OS. 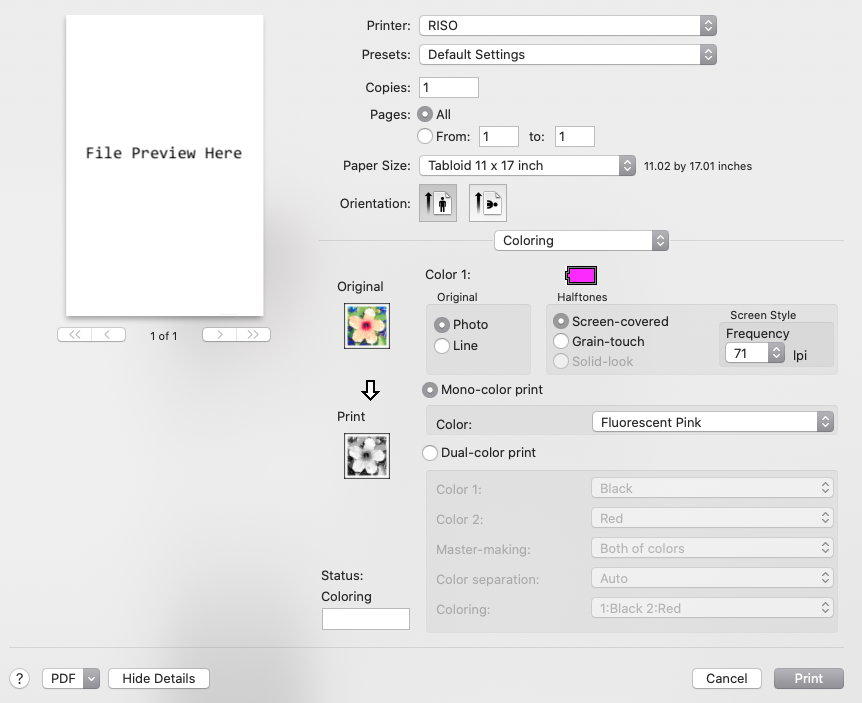 risograph
Back to posts