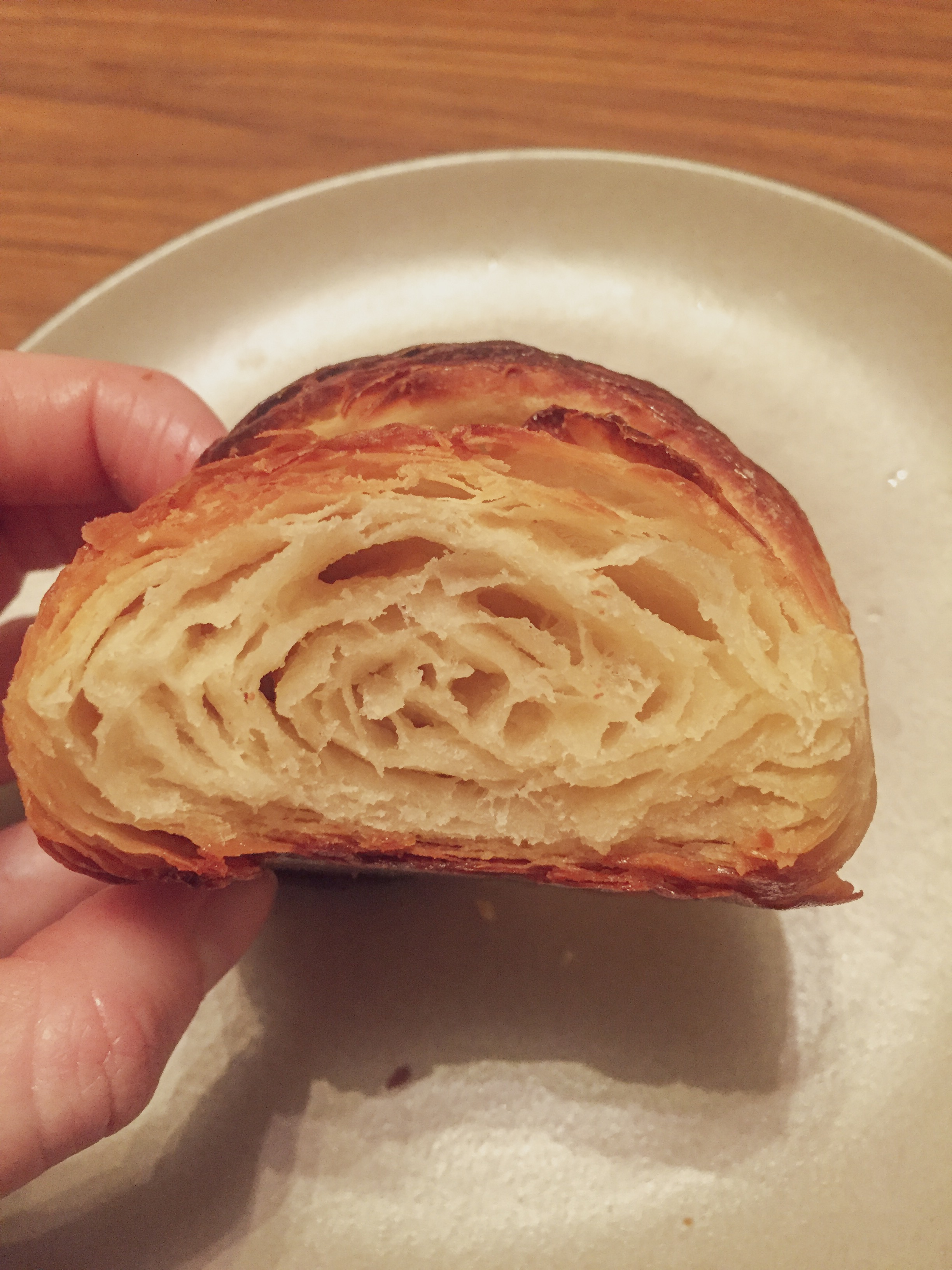 Me and my friend Luke D. attempted the Tartine Bread book croissants for the first time this week… and they turned out pretty great! 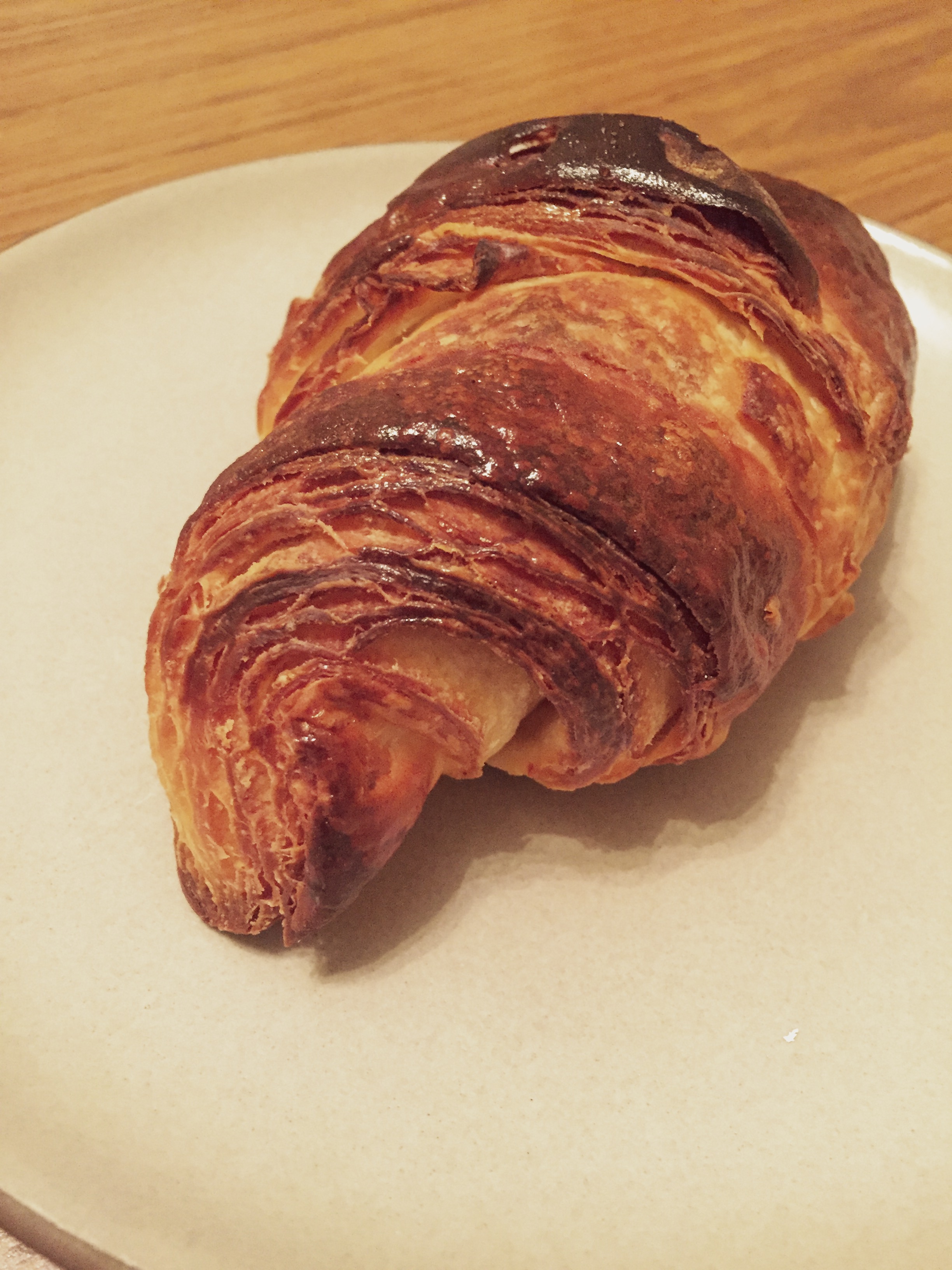 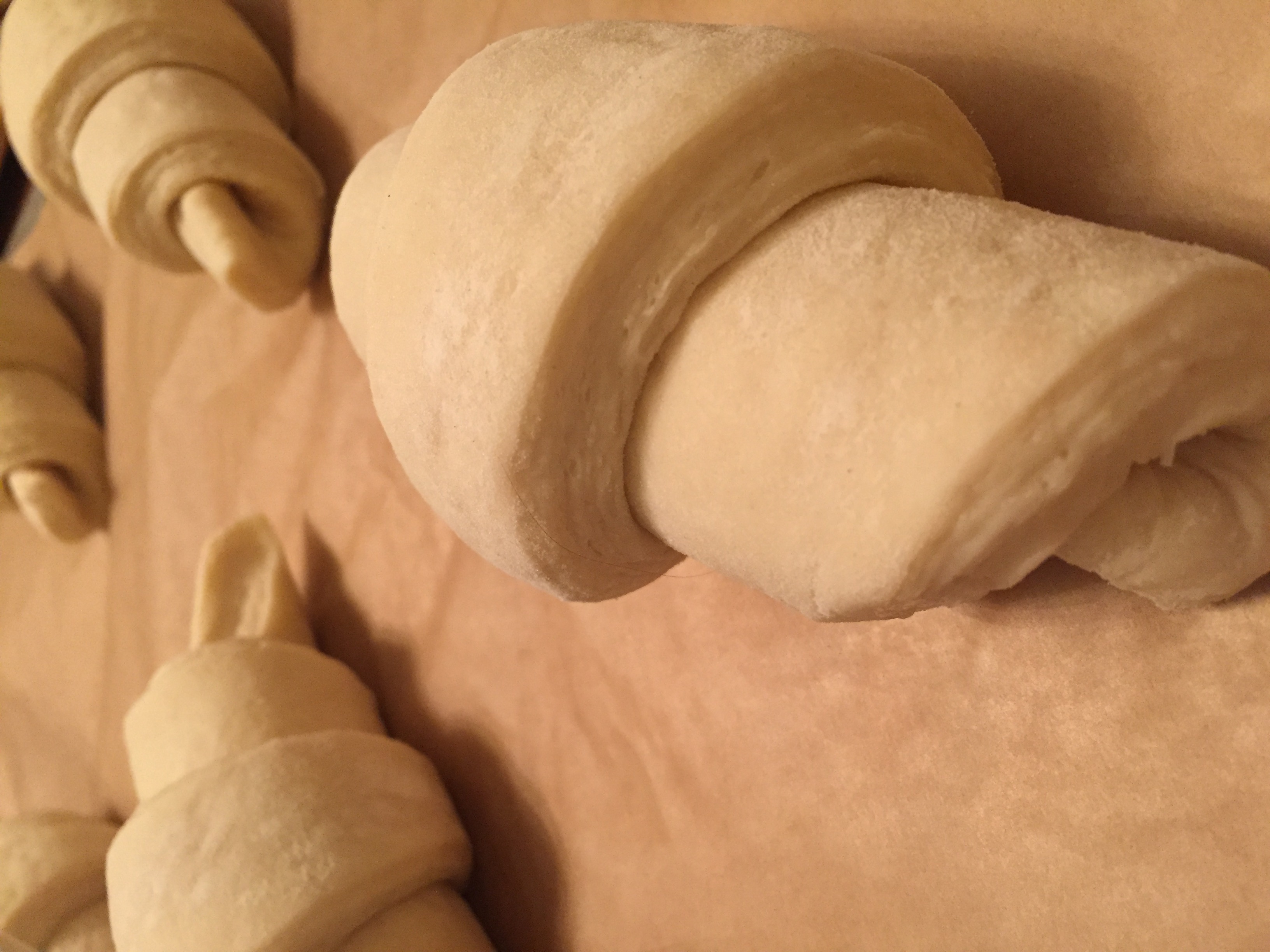 Croissants have been a vague interest for a while, but I’m not sure I would have had the fortitude to tackle this on my own - hadn’t so far, at least. Luckily Luke moved nearby and is now a close enough neighbor that we could pretty easily get together in the mornings and evenings for a few days.

Figuring it out together made it a lot more fun and less intimidating. That’s maybe my #1 tip from everything I learned from baking croissants for the first time, is to do it as a team effort somehow.

We met up for lunch on Sunday and planned it out and did the first step, and then met up in the morning and evening on Monday and Tuesday before and after work time.

Luke says: “Even though it seems daunting at first, the multi-day process actually means you break it up into manageable chunks.”

The schedule was basically this:

Day 1, after lunch: Make the leaven, make the poolish. I used my regular sourdough starter for the leaven and yeast from a jar of Fleischmann’s Active Dry that I had in the fridge.

We covered both with dish towels, and put the poolish in the fridge and left the leaven near the radiator. (It’s winter-ish here.)

Day 2: MORNING Float test the leaven & poolish. Make the dough. Rest the dough 25-40 minutes. Transfer to a plastic tub and let rise for 1.5 hours, doing 1 “turn” (pick up and flop it over on itself in half, once) every 30 minutes. Transfer the dough to a plastic bag and press into a rectangle, put in fridge. (I used a 6L ziplock bag from IKEA, not sure it would have quite all fit into a gallon ziplock, but probably it would have and just been thicker.)

EVENING Laminate the dough and do the three folding turns that create the 81 layers of butter & dough. This the most labor intensive bit of work, maybe 30 min of hands on time over the course of about 3.5 hours. Then we rested the dough+butter block overnight in the fridge.

In more detail, this involved: Cut 400g cold butter (about a 3 1/2 sticks) into cubes, sprinkle with half a cup of flour, and pound it with a rolling pin to make it into an 8 x 12 inch rectangle that’s pliable - the same consistency as the dough - but still stiff and cold. Then we put the butter in the fridge briefly to keep cool while we rolled out the dough. (Getting the dough out of the ziplock was nice to have four hands.)

(Here you’re supposed to put it in the freezer for 1-2 hours before you “retire” but I just wanted to sleep so I skipped that. Should try next time.) 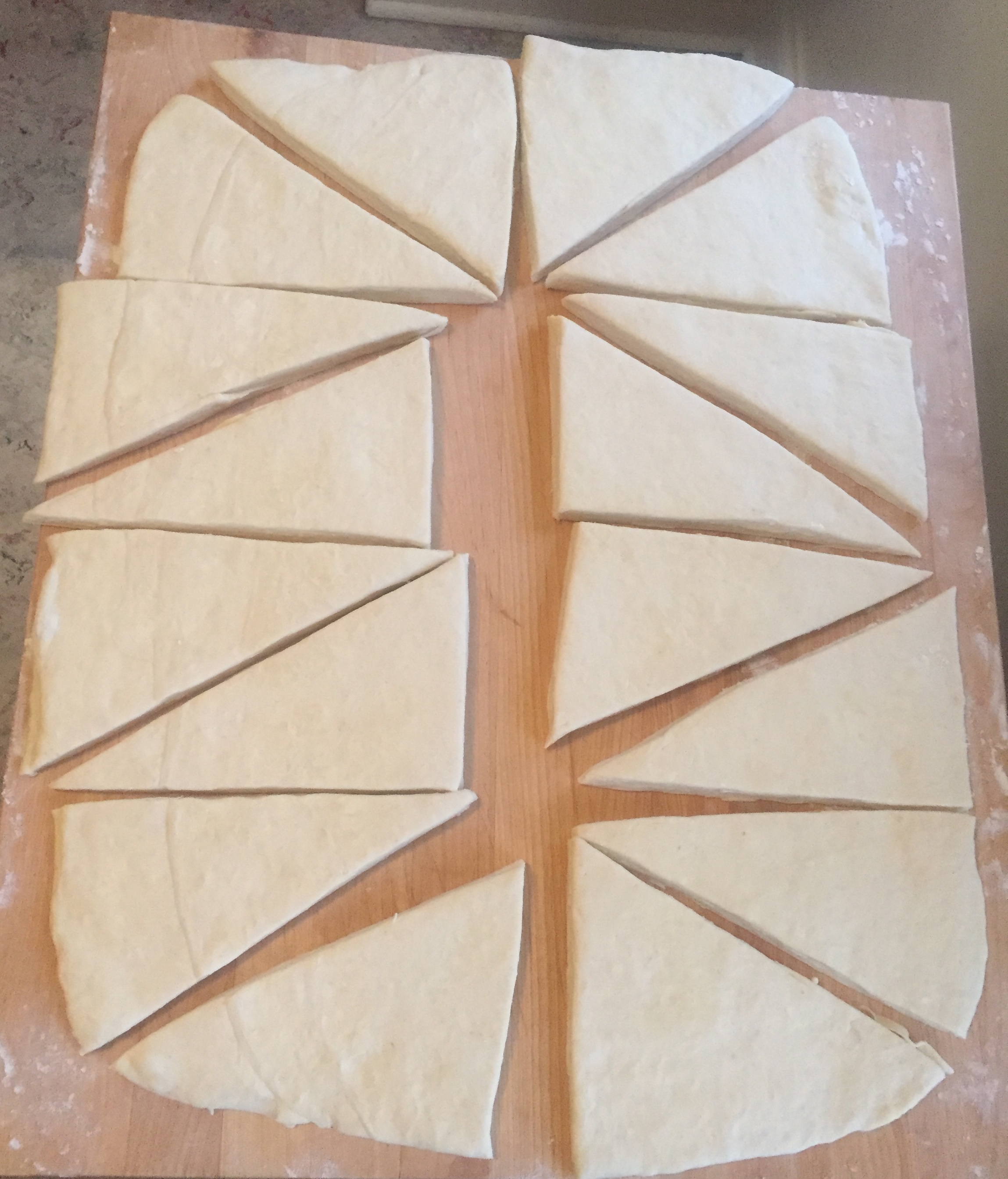 We trimmed the scraps off the rectangles at the ends to square them up, and braided the scraps. Roll up from the wide end of the triangle to the pointy end. Set them on parchment lined baking sheets. From here you can let them rise at warm room temp for a few hours, but we decided to retard the final rise in the fridge so we could bake together in the evening. We covered them loosely in plastic wrap and left them in the fridge all day. 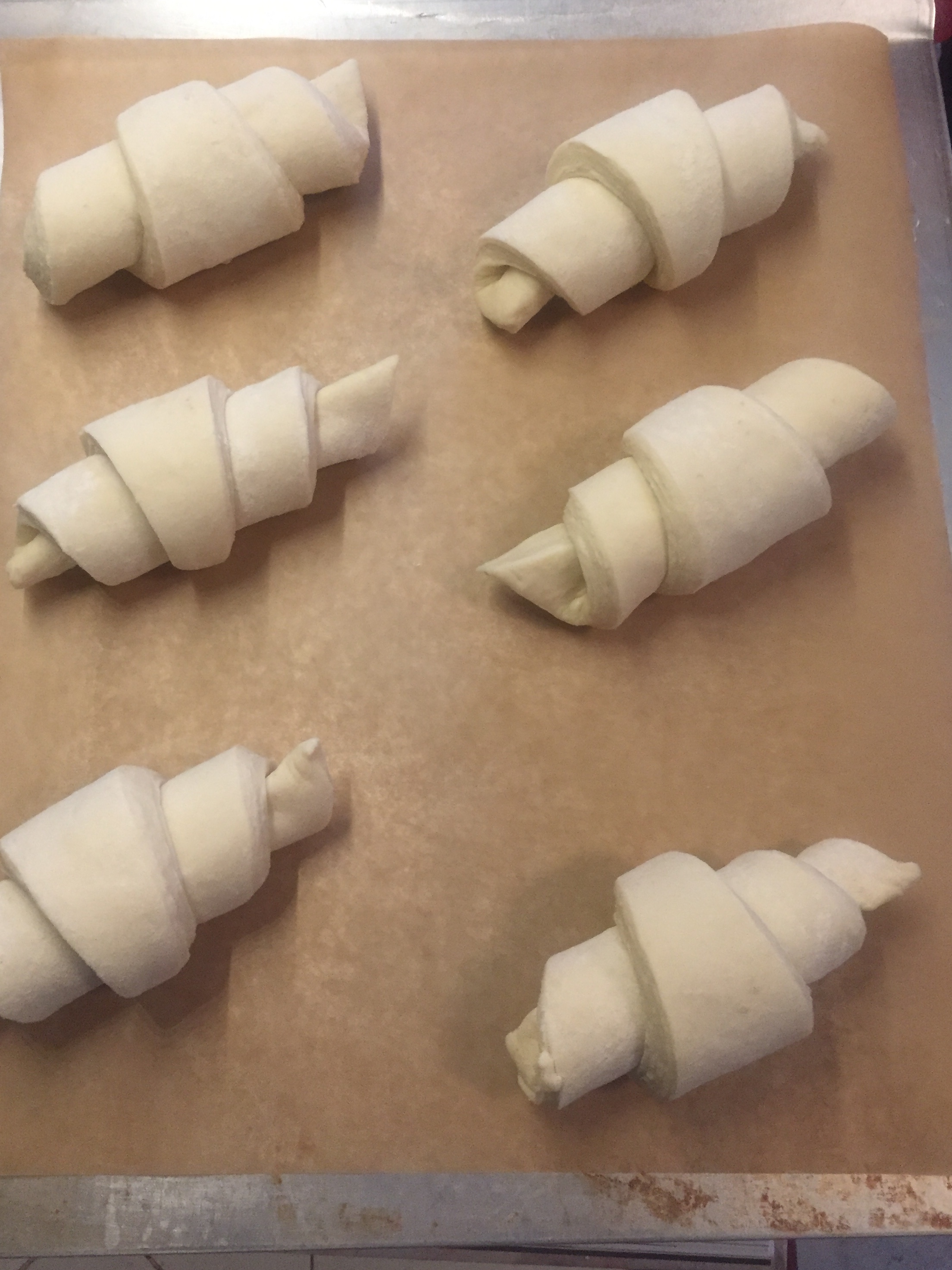 EVENING I took the croissants out about an hour before baking and let them rise a bit more - they ended up about 50% bigger than original and were still firm.

You could see the layers in the cut edges of the raw dough. 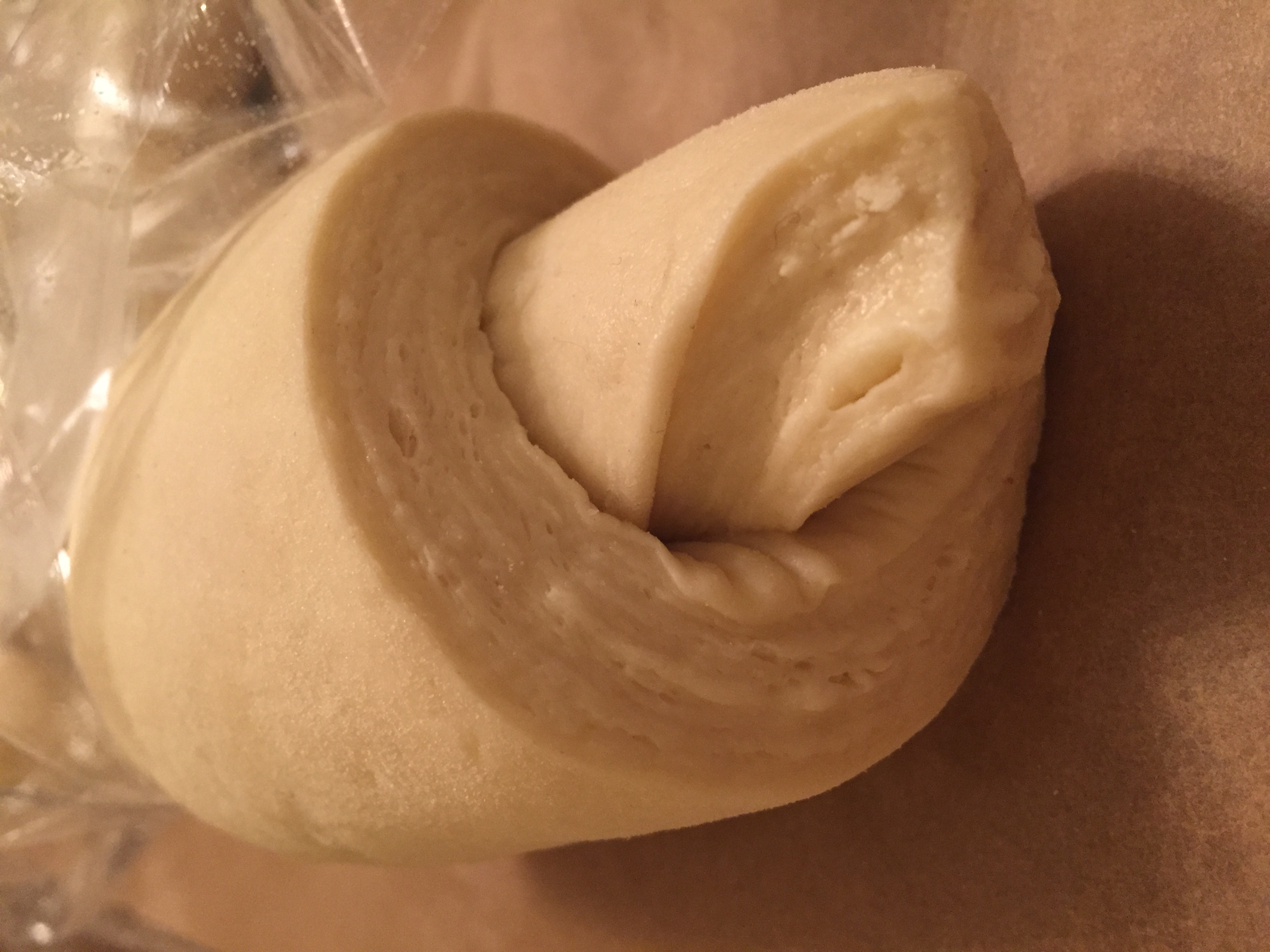 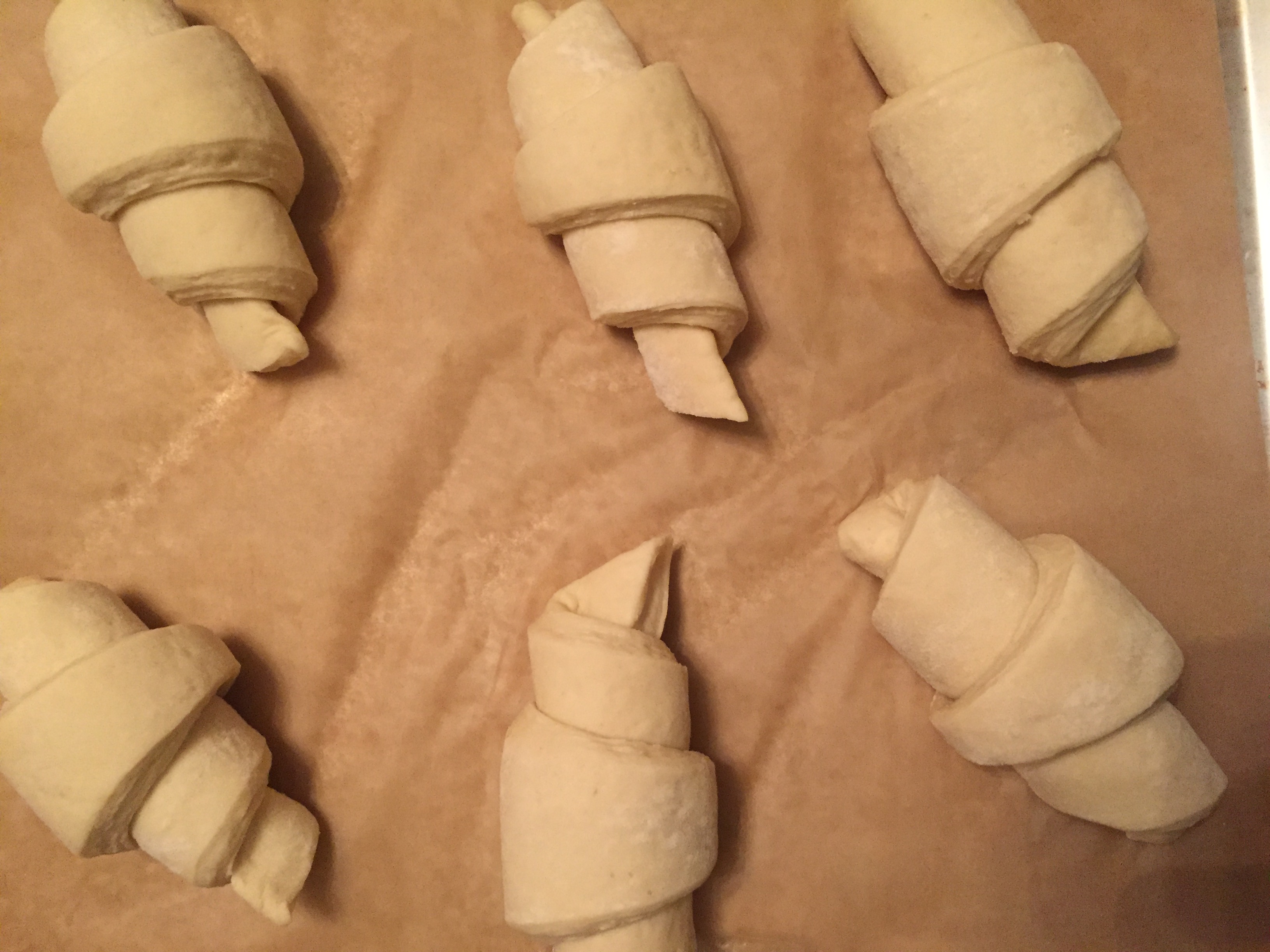 Preheat the oven to 425 for 15 min, and checked the temp on a thermometer inside before baking. Mix two eggs and 1 tsp of heavy cream to make the wash, and brush it on the tops. Baked it for 26-ish minutes (book said 30). (See notes below on oven logistics.) Let them cool on a wire rack and stare at them admiringly and smell them a while. Then everyone who was around all ate some, and we were happy. 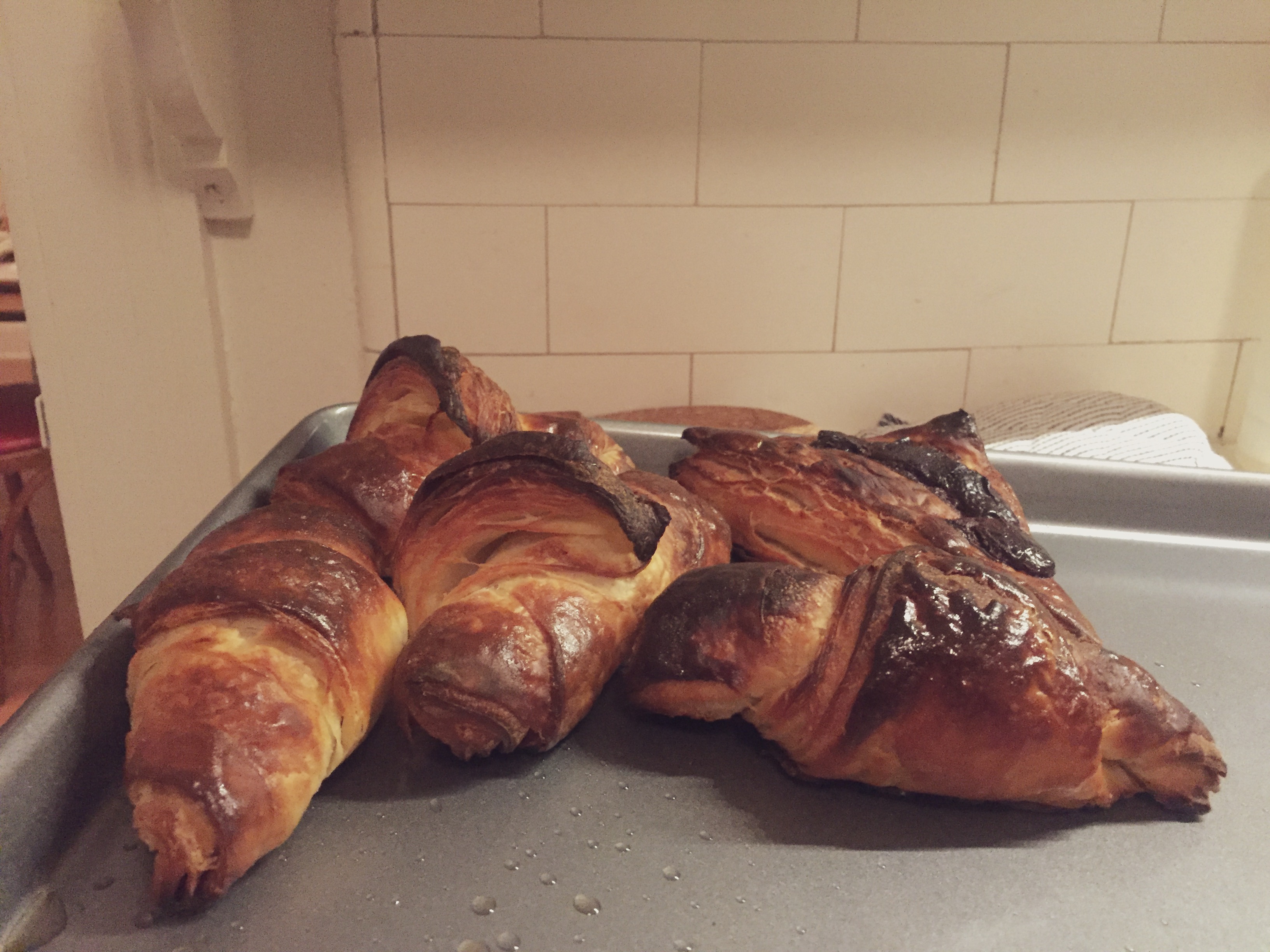 Things we’ll do different next time:

Luke says: “The butter pounding was definitely a new thing for me. Seems like you having a marble rolling pin really helped, would probably have been harder with a wood one.”

Oh, that’s a good point! Next time I’ll put the rolling pin in the fridge for a while before the butter pounding step. I should also mention that I got my marble rolling pin at a thrift for $5 and often see them at the Dearborn St. Goodwill one in Seattle… I bet the bougie city stock of unwanted marble rolling pins is huge! (Looks like they are $15+ new. The Sur La Table one is $30.) 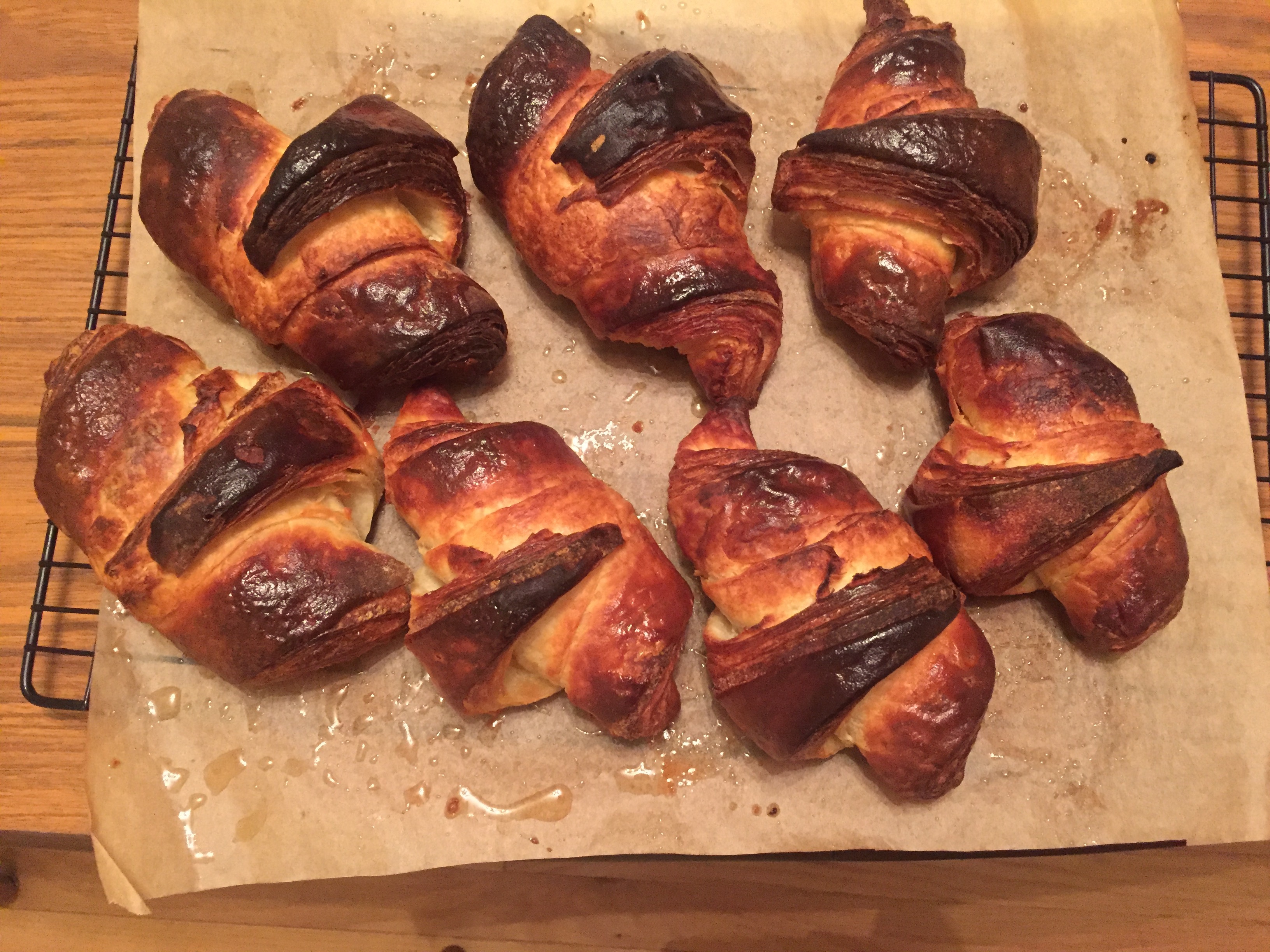 Things to try next:

I already had all the equipment necessary from making sourdough. Not counting our time, because this is a leisure/entertainment activity for us, but that would be a lot of $$$. Running an oven in Seattle for 1h is probably about $0.10 of electricity.

The rest I didn’t pay exact attention, but these are pretty decent estimates for mid-quality Seattle groceries:

= $6.50 to $7.50 for ingredients, or likely a few dollars less if you bought slightly lower end groceries or not in an expensive city like Seattle.

Also keep in mind you’d spend more on the initial stock up if you didn’t have a lot of this on hand, because you’d have half a stick of butter left and all the extra flours and milk left.

Still, let’s go with $8 as a cost for the batch just to make math easy, say we made 16 croissants, so it cost $0.50/croissant for the ingredients.

If you read all this please send me a note and say hello and tell me your baking dreams or whatever! You might also like ramblings on sourdough routine and sourdough $ math.

I think Luke and I are going to attempt a second run in January. Will report back.

baking croissants
Back to posts